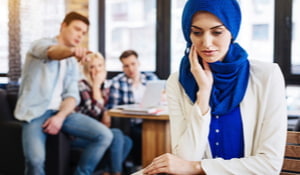 FEHA applies to employers with a minimum of five employees. Under FEHA, religious discrimination can include any adverse action taken because of religion, religious belief, creed, or religious observance. The WRFA extends additional protections. Under the WRFA, religion includes every aspect of religious creed, belief, practice, and observance, including grooming and religious dress. For example, if you are an Orthodox Jew, your employer should not refuse to place you in a customer-facing position because you wear a yarmulke. Similarly, if you are Sikh, your employer should not refuse to promote you to a management position because you wear a turban. A religious discrimination attorney in Orange County can help you bring a claim if this happens.

You can hold your employer accountable if it takes any adverse action against you based on your religious beliefs or practices. Adverse employment actions include termination, demotion, failure to hire, failure to provide training provided to others, denying equal pay, refusal to promote, or denial of benefits. Harassment based on your actual or perceived religion is also prohibited. Our Orange County religious discrimination attorneys can advise you on whether certain conduct is actionable harassment.

Before you can file a lawsuit for damages under federal or state law, you will need to exhaust your administrative remedies. You may need to file a charge with the Equal Employment Opportunity Commission (EEOC) if you are proceeding under federal law, or with the Department of Fair Employment and Housing (DFEH) if you are proceeding under state law.

Your work on the job should be judged on its own merits, rather than your religious beliefs. If you believe that you were subject to religious discrimination, you should consult the Serendib Law Firm. We represent people in Orange, Los Angeles, San Bernardino, and Riverside Counties. Call us at 1-800-LAW-8825 (800-529-8825) or contact us via our online form.

Contact Us
Areas de Practica
Client Reviews
★★★★★
"Integrity, competency, and compassion! Dimuth Amaratunga has represented me and counseled me in several matters over the last several years, and each time, I have benefited tremendously from his knowledge, his wisdom and his empathy. He is without a doubt an authority in employment law and personal injury. But most importantly, he has compassion and truly focused on getting the best result for his clients. I am a practicing attorney and I wholeheartedly recommend him and his firm!" David J.
View More
Submit a Law Firm Client Review